How often do you find yourself confused about trying to say numbers and dates in English?

In your native language? This is no problem at all - it is very normal and natural.

In English? You sound like you don't know anything about finance and your colleagues and clients do not have confidence in you because you are not able to clearly communicate numbers.

♦️ When your listener doesn't have confidence in you, they don't trust you!

This article will cover the following:

As we begin this journey of understanding numbers, you'll be given a series of examples. Let's begin by assuming that the numbers are actual numbers and not currency ($, Euro, etc.).

632 is pronounced as six hundred, thirty-two. If we expand the number to 354,632, the most helpful technique is to chunk the numbers into small groups of three digits and separate them with a comma. If we expand the number to 292,354,632, we now create three chunks, separated by commas and again we don't need to use the word "and" when we say this number. And if we continue to expand the number to include a decimal point, another change will take place.

It is important to remember that we are still discussing numbers in our example, and not currency.

A couple of important changes take place. First, you'll include the decimal point which signifies that you will have a number less than one. When you say this number in the US, you'll usually use the word "point" to describe the decimal point.

In other parts of the world, you'll use the word "dot" to describe the decimal point. 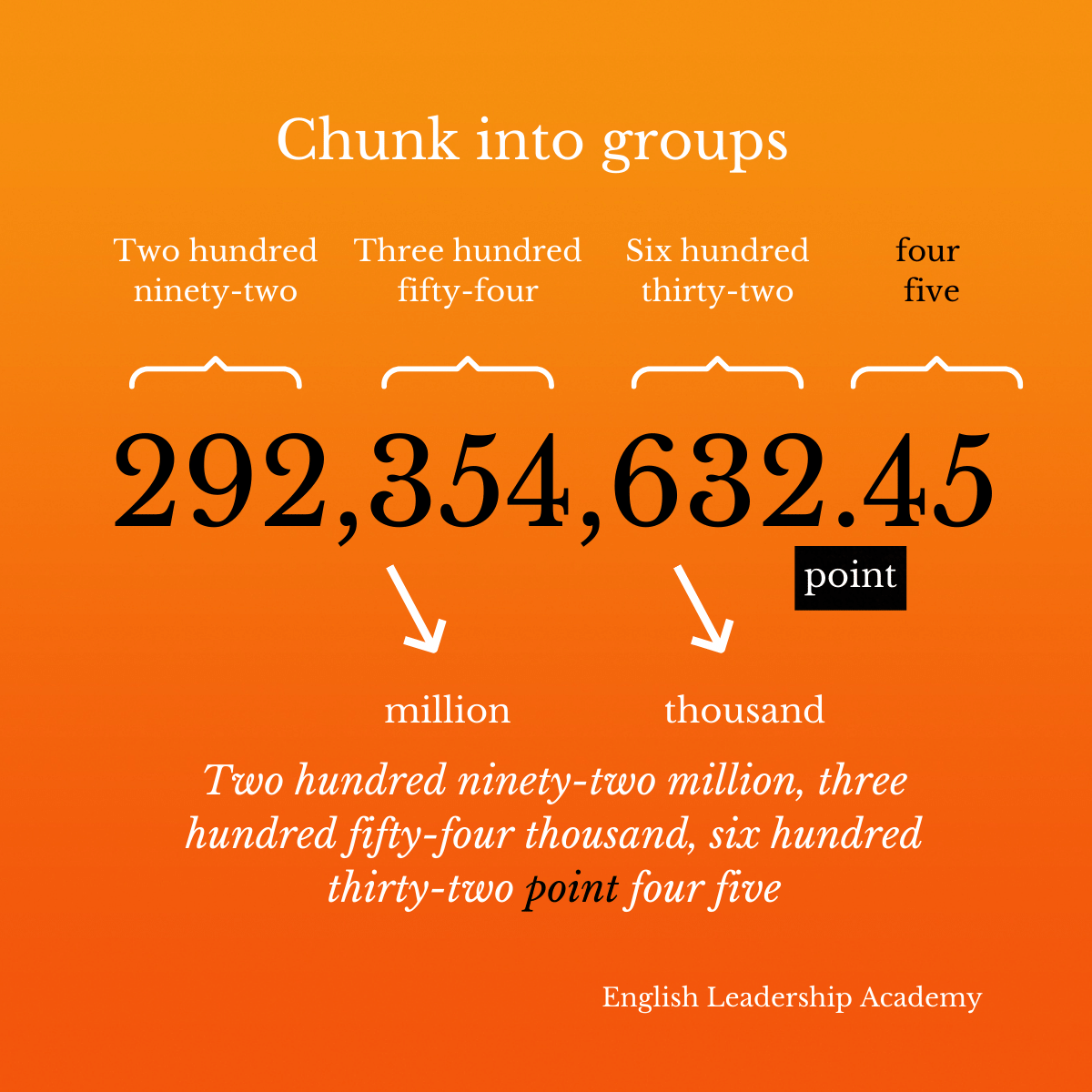 Let's look at how some things change when we begin using currency, such as US dollars.

The big change is to say the currency (dollars/euros/rupees) after the last whole number, which in this case is after the 632. You will then include the words "dollars, and" and then finish by changing the "four five" to "forty-five cents." 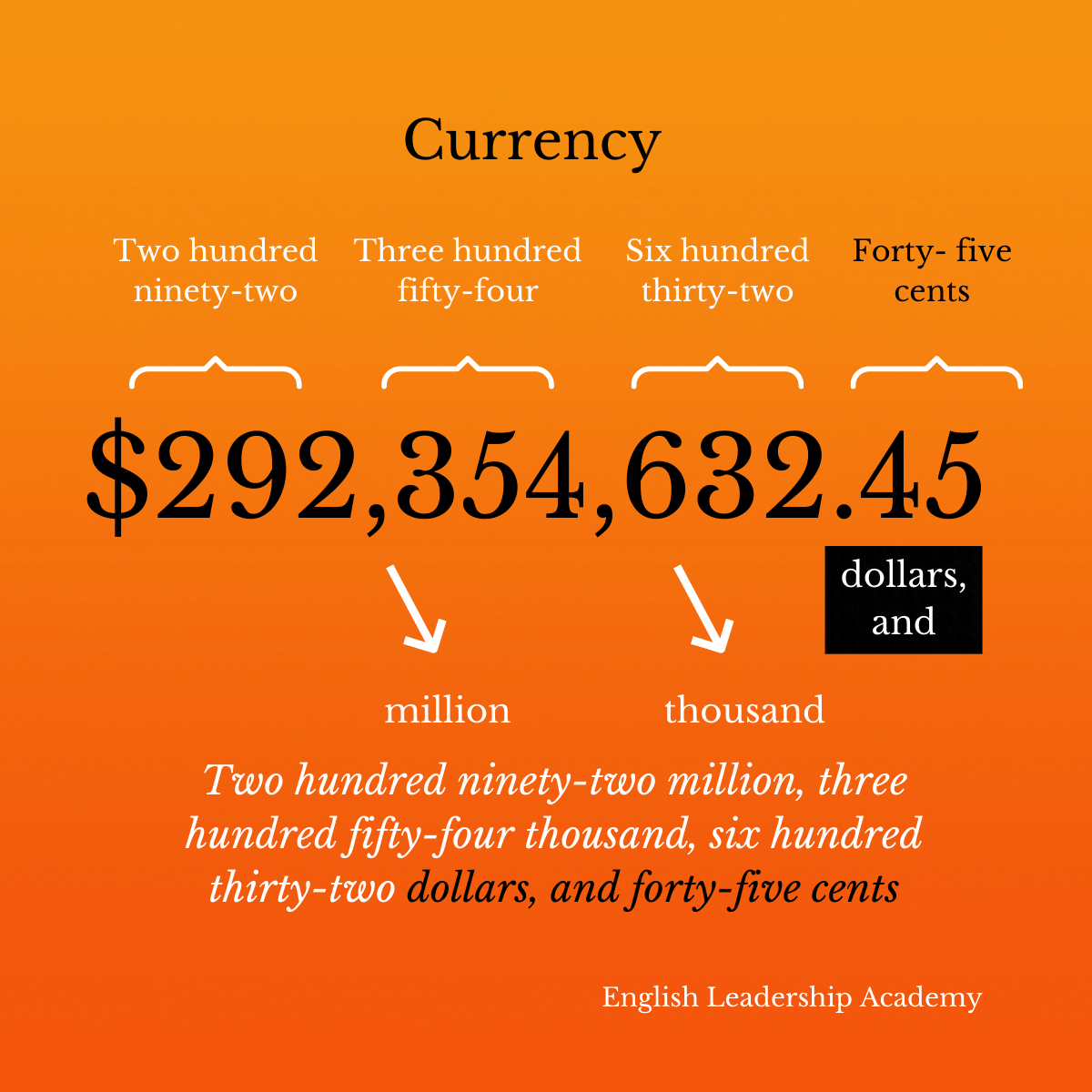 More than half of the countries in the world use a different format than what has been shown above. In general, the commas become decimal points and the decimal point becomes a comma.

You will find this in most (but not all) of the countries in Europe as well as in many different countries around the world. Here is more detailed information on countries that follow the decimal separator system, which is aligned with the metric system.

Below is an example of the difference of these two methods, and note that you will say it the same way as described before. Some tips to think about:

Exception: The words Dollars/Euros/Rupees are plural.

3. With currency, you will say the big numbers first followed by the currency denomination, such as dollars or euros. As an example, $34,089 is said as thirty four thousand, eight-nine dollars.

A native speaker would naturally say 1,100 as eleven hundred. It is more formal to say one thousand, one hundred. Your goal is to speak naturally, so become comfortable with eleven hundred.

You would naturally say 9,800 as ninety-eight hundred.

The following applies to numbers and prices.

You would say $200 as two hundred dollars.

You would naturally say $1,400 as fourteen hundred dollars.

You would naturally say $7,800 as seventy-eight hundred dollars. 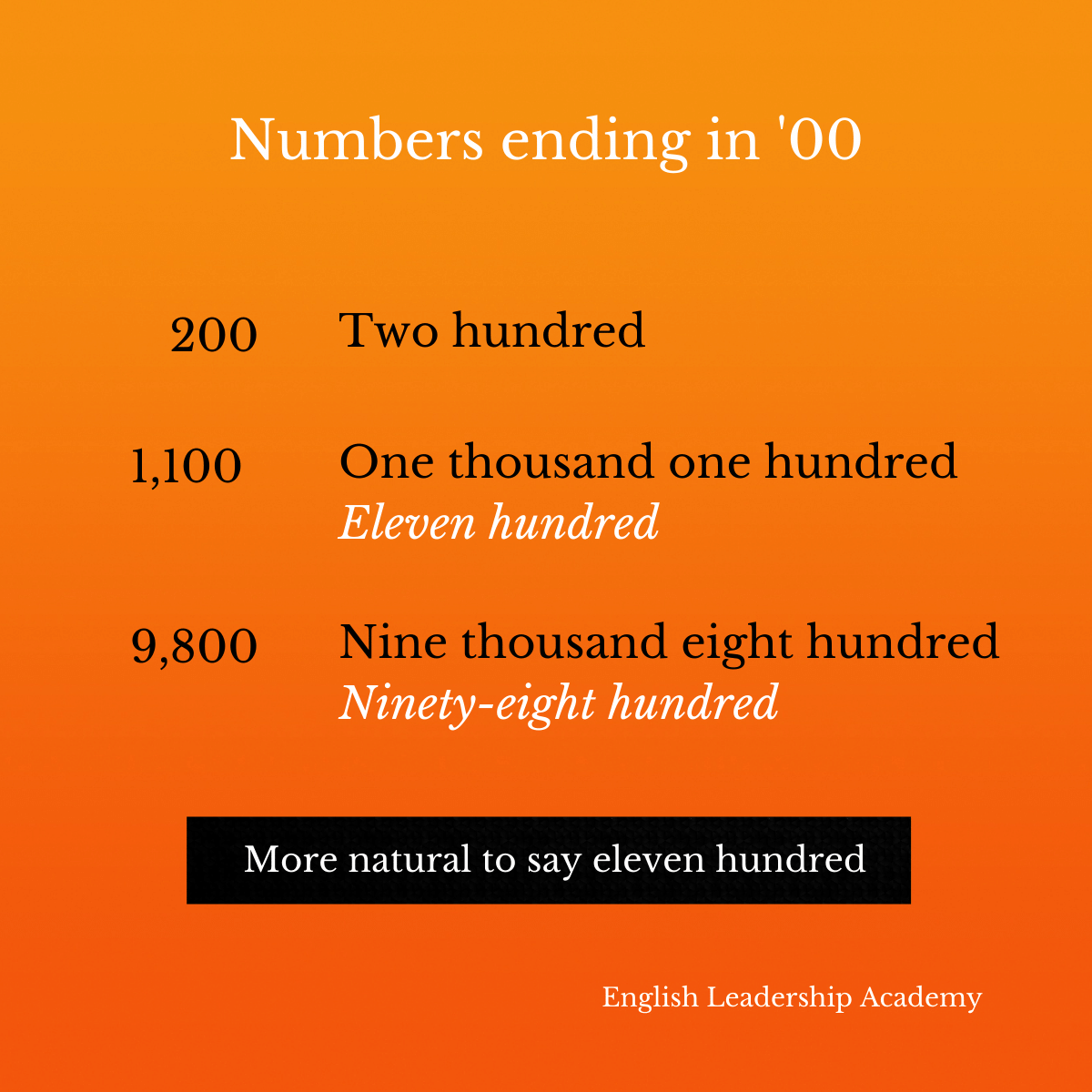 As an interesting side note, you can also say "nine grand" or "9k." You will never write nine grand, but you will hear native speakers say it naturally. These are both very normal and very casual ways a native US speaker would say this.

You would say $98,000 as ninety-eight thousand, or casually you could say 98 grand (but never write this) and many native speakers will write 98k. Let's break down dates into a few categories. We'll start big and then dive deeper into more detail.

One of the best tips you can use to make years sound very natural is to break the dates into two chunks as illustrated below: In all past years of history, the first ten years of a century were always said the same way.

1801 has always been said as eighteen oh one.

1907 has always been said as nineteen oh seven.

2001 is said as two thousand and one, and not twenty oh one.

2009 is said as two thousand and nine and not twenty oh nine.

Some things just can't be explained. Please see examples of this below. Every 100 years is a century. There are times when you need to discuss something that happened many years ago. Here is a simple illustration of how you can naturally say different centuries in English. Often dates are described by the decade they happened in. A decade is a ten year period. It is interesting that even for native speakers, it is uncomfortable to say the 2000s (said as the two thousands), the 2010s (said as the twenty tens) and twenty twenties (2020s), so you are not alone - everyone is a little uneasy saying these.

Let's look at some examples and how you can say them as a native US speaker would say them. 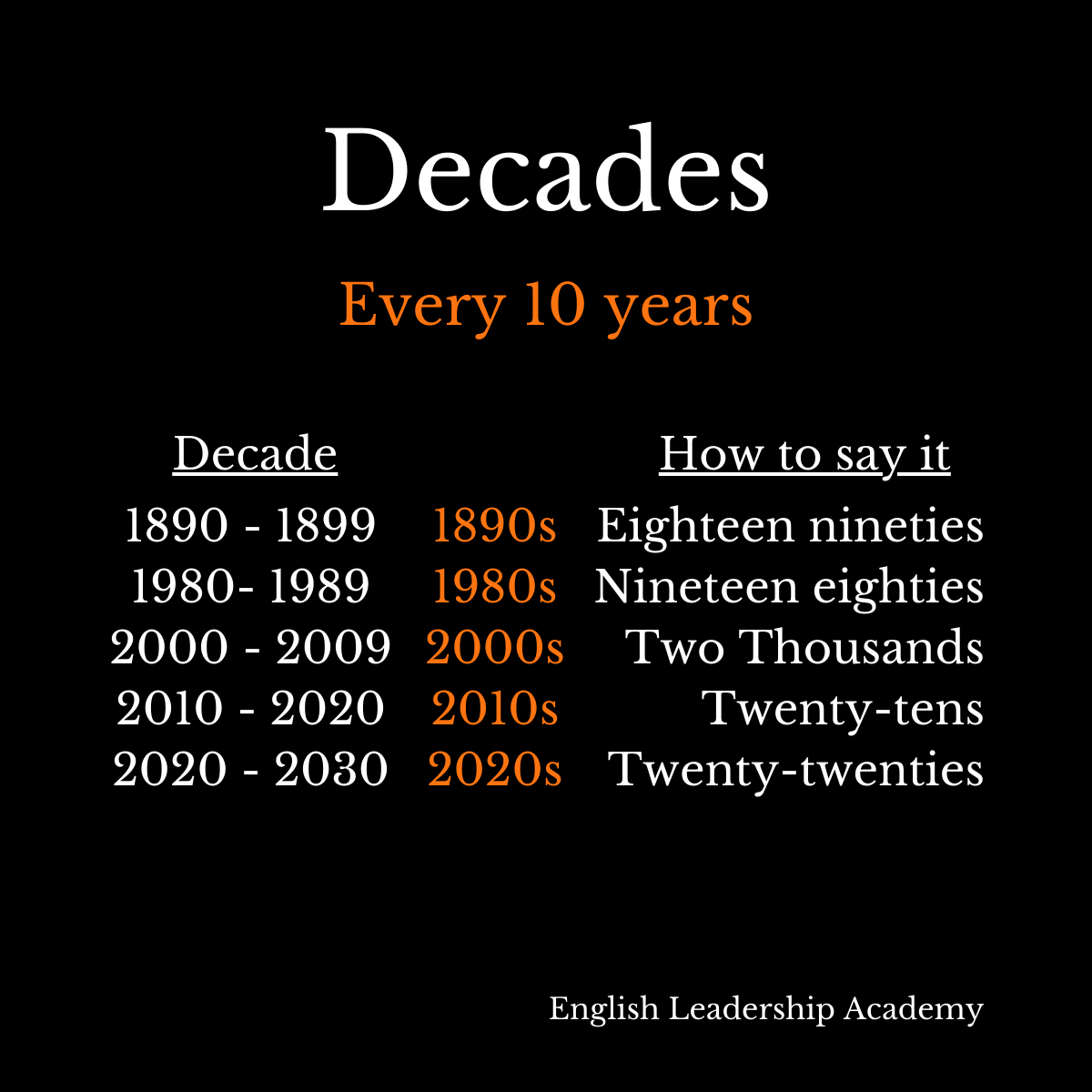 As a non-native speaker, it is difficult to communicate dates accurately when you are speaking. Let's look first at how you say numbers that are used for dates.

Here's an example of how you say these numbers. Let's put it all together now with the month, day and year. Of course, this creates more confusion as the US is one of the only countries that uses the month - day - year format.

In the US, you would naturally say January 3rd, 2021 as January third, two thousand twenty-one.

You can use the table above as a guide for how to say days as part of these full dates.

An alternative way to refer to this is the 3rd of January, 2021 or say it as the third of January, twenty twenty-one. When you say it in this way, it tends to fit within the format of many of the countries in the world as day-month-year.

Additionally, there are some countries that use the format of year-month-day.

The calendar can vary from country to country and dates will always be confusing. The recommendation is to use the format that corresponds to the country that you are using the information for.

The illustration below demonstrates how you would say dates in the US. Please note that you say the date differently than you say the year (use chunking for the year), as explained earlier in this article.

Also keep in mind, this chart shows how you say the dates when you are speaking. This differs from how you write the date. The key with communicating naturally in business English is to practice saying these numbers and dates out loud. Try to make each of these become a natural part of your vocabulary and you will increase your communication confidence.

If you would like to learn how to become a better business English Speaker, please check out this article.

Mastering the ability to say numbers and dates will increase your confidence in your business English.